Progress on a lunar mining plan 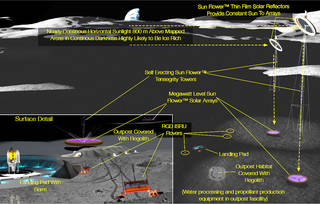 We now know for certain that the shadowed regions of the Moon’s poles contain water ice. There are many useful things that could be done with that ice: using it for astronaut drinking and washing; breaking it into hydrogen and oxygen, for breathing or for rocket fuel. Most plans for extracting the water suffer from one of two problems: either a huge amount of lunar soil has to be dug up and moved; or the water will re-freeze somewhere unhelpful.

Trans Astronautica has been working on an architecture that solves both of those problems. It uses sunlight obtained from huge towers, reflected down to the surface, to generate power, and uses microwaves and infrared to warm the soil without the need to dig. Here is NASA’s description of the concept:

The LPMO design was already being supported by the NASA Innovative Advanced Concepts program. It was just selected for a Phase II award under that program. Congratulations to Trans Astronautica and its principal investigator Joel Sercel.