The future of worldwide communications? 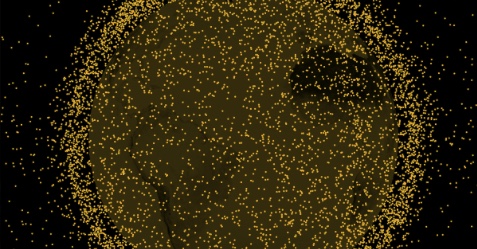 Dr. Casey Handmer, a theoretical physicist by training but a keen thinker in the area of space communications, has written an eloquent essay. In his view, worldwide communications in the near future will boil down to one word: Starlink. Here is the link to the full essay:

Starlink is a very big deal

Part of Handmer’s argument is that Starlink is poised to dominate all other forms of space-based communication because of StarSHIP–that is, the satellite constellation is a customer for the launch provider, who are the same thing, and therefore only internal costs need be considered. He also makes sense of the recent SpaceX filing for 30,000 satellites, and concludes that it’s the right number, based on population densities, reasonable satellite throughputs, etc. I cannot do justice to the thoroughness and insightfulness of Handmer’s analysis, so I strongly encourage you to read the whole thing.

But what does this have to do with space robotics? Well, it’s a challenge to the whole idea. Starlink, and every other space communication system, is going to be driven by the huge growth in demand for internet services: 26% per year, and not likely to slow down in the near future. Space robotics would be great for building huge communications platforms in GEO, from which massive amounts of internet traffic could be broadcast. But if Handmer is correct, GEO as a whole could become irrelevant compared to the massive capacity of Starlink.

Another application of space robotics that is currently the rage is removal of space debris. 30,000 Starlink satellites is about the same number of objects as contained in the U.S. Air Force space object database. If some of those Starlinks fail after reaching their final orbit, they become a danger to other spacecraft in the Starlink constellation, other LEO spacecraft, and the International Space Station or its commercial successors. Space robotic-equipped vehicles could be used to remove the dead satellites. It isn’t clear if SpaceX cares.

Handmer’s essay also pooh-poohs a technology that could improve Earth’s climate: space-based solar power generation. Space robotics would be essential to constructing the kilometer-scale space platforms that would collect sunlight, convert it into microwaves, and beam it to the ground in a beam small enough that it could be collected efficiently. Handmer says that the margins on such a system are too small or even negative. I suspect that’s not correct if you take into account the cost of environmental damage and climate change. The electric power industry has always been a low-margin business, kind of like groceries.

Starlink is currently facing a challenge: finding user antennas that are cheap enough to be affordable to individual users. Companies are scrambling to solve that problem. Starship has not yet flown. So the future is not certain, but Handmer’s brilliant analysis gives us one picture, and it’s very different from the one I had in mind.