Robots in space—what’s so important? Why should I care? 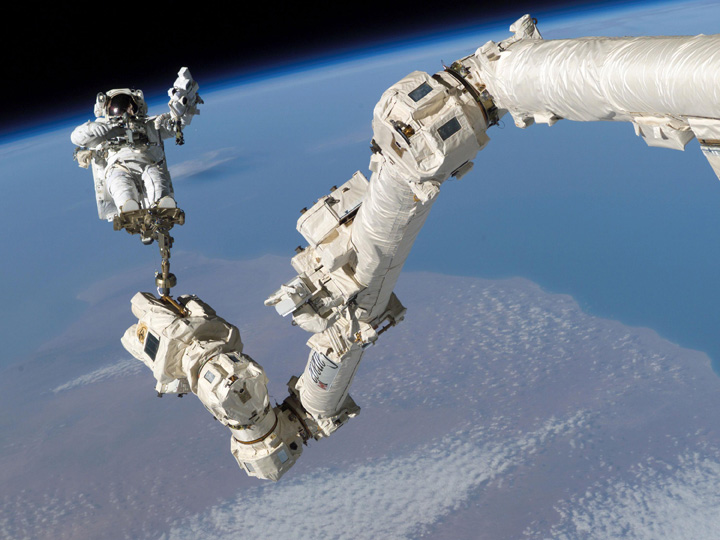 Most people don’t spend much time thinking about space. But all of us in developed countries get lots of services from space, that we take for granted:
• Weather satellites warn of approaching hurricanes and typhoons. They have saved millions of lives.
• High definition television systems like DirectTV come from satellites far above the Earth.
• When we drive from place to place, we rely on our navigation systems in our cars and cell phones. These get their information from GPS, a system of satellites.
• All of the world’s cell phones are synchronized by the timing signals coming from GPS satellites, too.

Today, none of these space-based services depend on robots. Instead, what we do is send up satellites, and then throw them away:
• If they run out of fuel
• If they malfunction
• If they become obsolete

Imagine if we treated cars this way! You have to buy a new car if it runs out of gas? If it breaks down?

Those are jobs for robots in space.

To get an idea of the valuable things space robots can do, here is an article on one particular space robot project. It’s called Robotic Servicing of Geosynchronous Satellites (RSGS).

RSGS does the same kinds of jobs in space that tow trucks, gas stations, aftermarket installers and insurance adjusters do for cars.

From the business perspective, robots in space bring two huge advantages: they lower the cost of doing missions in space, and they allow building new capabilities that we just can’t have today. Robots in space can be the centerpiece for huge growth in the space economy. I’ll explain more about those in future posts.

• Keep up with the latest developments in space robotics, like mission milestones, launches and space operations
• Find some key articles on file, for students, investors, engineers and policymakers to consider
• Hear about upcoming events that space and robotics specialists can attend
• Get my personal opinions on progress in space robotics