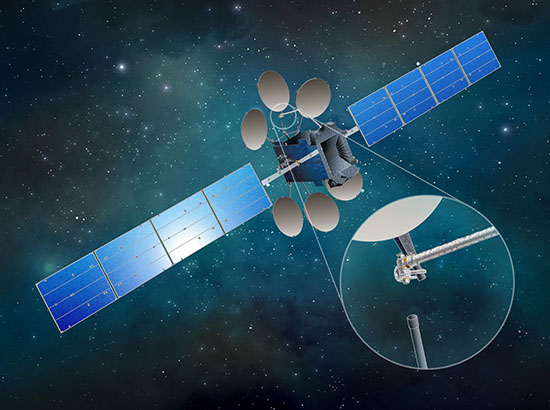 Astronauts repair and upgrade the Hubble Space Telescope during the first servicing mission to that orbital observatory, in 1993. NASA is now studying how telescopes far larger than Hubble might someday be assembled and serviced in space by astronauts or robots. Credit: NASA

After snapping the final piece into place with a satisfying “click” she feels through her spacesuit gloves, the astronaut pauses to appreciate the view. Her reflection swims before her in a silvery disk the size of three tennis courts; for a moment she feels like a bug floating on a darkened pond. Composed of hundreds of interlocking metallic hexagons like the one she has just installed, the disk is a colossal mirror 30 meters wide, the starlight-gathering eye of the largest space telescope ever built. From her perch on the robotic arm of a small space station, Earth is a tiny blue and white orb she could cover with an outstretched thumb, dwarfed by the bright and silent moon spinning thousands of kilometers below her feet.

Although this scene remains the stuff of science fiction, an ad hoc assemblage of scientists, engineers and technocrats now say it is well on its way to becoming reality. Under the auspices of a modest NASA-sponsored initiative, this diverse group is gauging how the space agency might build bigger, better space telescopes than previously thought possible—by constructing and servicing them in space. The effort, formally known as the “in-Space Assembled Telescope” study (iSAT), is part of a long trend in which science advances by piggybacking on technologies created for more practical concerns.

For example, the development of surveillance satellites and warhead-carrying rockets during the 20th-century cold war also catalyzed the creation of robotic interplanetary probes and even NASA’s crewed Apollo lunar missions. Similarly, in the 21st century a soaring military and industrial demand for building and servicing satellites in orbit could lead to dramatically enhanced space telescopes capable of definitively answering some of science’s biggest questions—such as whether or not we are alone. “The iSAT is a program that can be NASA’s next Apollo,” says study member Matt Greenhouse, an astrophysicist at the space agency’s Goddard Space Flight Center. “And the science enabled by the iSAT would likely include discovery of extraterrestrial life—an achievement that would eclipse Apollo in terms of impact on humanity.”