A first customer for the Space Superhighway 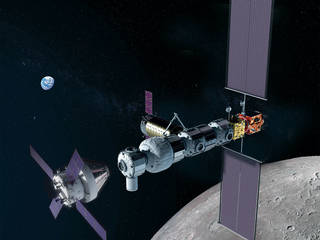 NASA has recently announced that it will partner with industry to resupply the Lunar Orbiting Platform-Gateway:

Last month in Aviation Week Online, we talked about the need for an in-space reusable infrastructure for such missions:

At the end of this post we include the contents of that post for those of you who are not AvWeek subscribers.

Here’s the bottom line: resupplying the Gateway for Artemis missions to the Moon is JUST ONE of the value-generating applications of a reusable in-space transportation system. And who knows what other industries will sprout by being able to leverage the SAME infrastructure?

NASA should look for the solution to the Artemis resupply problem that is REUSABLE, as well as SCALABLE. Then the “Amazons In Space” will arise.

The transition from government-led to private-sector-led space development is driving rapid growth in U.S. space activity, with thousands of professionals working to commercialize their ideas in a stunning array of applications. Analysts from various research firms see the space economy growing to $1-2.7 trillion within the next 30 years. This is a marketplace capable of creating new industries and jobs, catalyzing sustained innovation and boosting U.S. competitiveness globally.

Most of the recent investment in the space sector has gone into launch vehicles and data analysis. But to make space the dominant player in the growing demand for bandwidth, increased flexibility, timeliness and reduced capital costs, an integrated system of space-based transportation vehicles is the missing key ingredient. A space-based “superhighway” that can transport, build, install and repair space systems would put once-isolated units within Earth’s reach—and unlock the potential of the space economy.

Building the space superhighway starts with satellite servicing, a capability that will soon appear in geostationary orbit (GEO). Northrop Grumman’s Mission Extension Vehicle, DARPA’s Robotic Servicing of Geosynchronous Satellites (RSGS) and Effective Space Solutions’ SpaceDrone are already under development and will start servicing today’s satellites as soon as they arrive on orbit.

The same robotic hardware can be installed in reusable transportation vehicles to carry satellites, modules and supplies from one orbit to another. These vehicles could be either small orbital logistics vehicles for individual modules or large space tugs to move entire spacecraft. Future satellite designs could incorporate new features to leverage this transportation capability more broadly.

The infrastructure would connect the high-value venues of low Earth orbit (making use of the array of new low-cost launch vehicles), GEO, cislunar and even the lunar surface. Multipurpose platforms could be added in each of these orbits, where robotic assembly and hosting of multiple payloads would reduce capital costs for new projects. Logistics vehicles and tugs make sense because they are reusable, as the reusable first stages built by SpaceX and Blue Origin have been winners for the launch market. Eventually, this system would become the distribution network for lunar missions.

A highly leverageable transportation system of this scale and scope is not without precedent. For example, the Dwight D. Eisenhower National System of Interstate and Defense Highways, which originally focused on military mobility, enabled the creation of the long-haul trucking industry. Amazon has tapped a preexisting transportation network (established by the U.S. Postal Service, UPS and FedEx) and communication system (the internet) to earn hundreds of billions of dollars through distribution of its products.

Like the Interstate Highway System and the internet, a reusable transportation system in space would lay the foundation for new industries, entrepreneurial opportunities, reduced risk for space projects and new ways to make money. A research firm has predicted $4.5 billion in cumulative servicing revenue over the next 10 years. With the addition of the space superhighway and the products it would deliver, the industry could realize earnings of many times this amount.

In addition, the technology base would be broadened, with a substantial reduction in capital expenditures as the industry took advantage of reusability, modularity and flexibility. It would connect with other important space activities such as a sustainable return to the Moon. From a national security perspective, Defense Department space operators would be able to use this same architecture to make their space systems more robust, incorporate new technologies more quickly and enhance responsiveness to new technologies and threats.

Creating such a system of systems in space requires cooperation, standardization and partnership development. The space superhighway would support President Donald Trump’s push to return humans to the Moon by 2024: It could provide the mechanism for delivering supplies to astronauts on the lunar surface and in cislunar space. Some other National Space Council initiatives are also critical, such as the space traffic management regime called for in SPD-3.

The DARPA-led CONFERS effort has shown how industry and government can work together to develop standards for satellite servicing. CONFERS has published consensus principles for safe operations, and a similar activity could put the space superhighway on a sound footing.

America’s technology base has always benefited from investments in space, and the space superhighway would further advance its technological prowess. Private-sector investment could build it, lowering capital costs for new space projects, which could capture a greater share of the exploding communications demand.

This is a confluence of investment opportunity, technological maturity, national security and innovation that must not be missed.

Gordon Roesler is the president of Robots in Space and was formerly DARPA’s program manager for the RSGS program. Mark Mykityshyn is a founding member of ADS Capital Partners and has led both venture capital and private equity funds.

The views expressed are not necessarily those of Aviation Week.